South West Counselling will be running a four week group in Dunsborough for new fathers, starting on Wednesday the 16th of June. If you are interested, or would like to register interest in future groups please contact South West Counselling on ph 9754 2052, or via email  at This email address is being protected from spambots. You need JavaScript enabled to view it.. 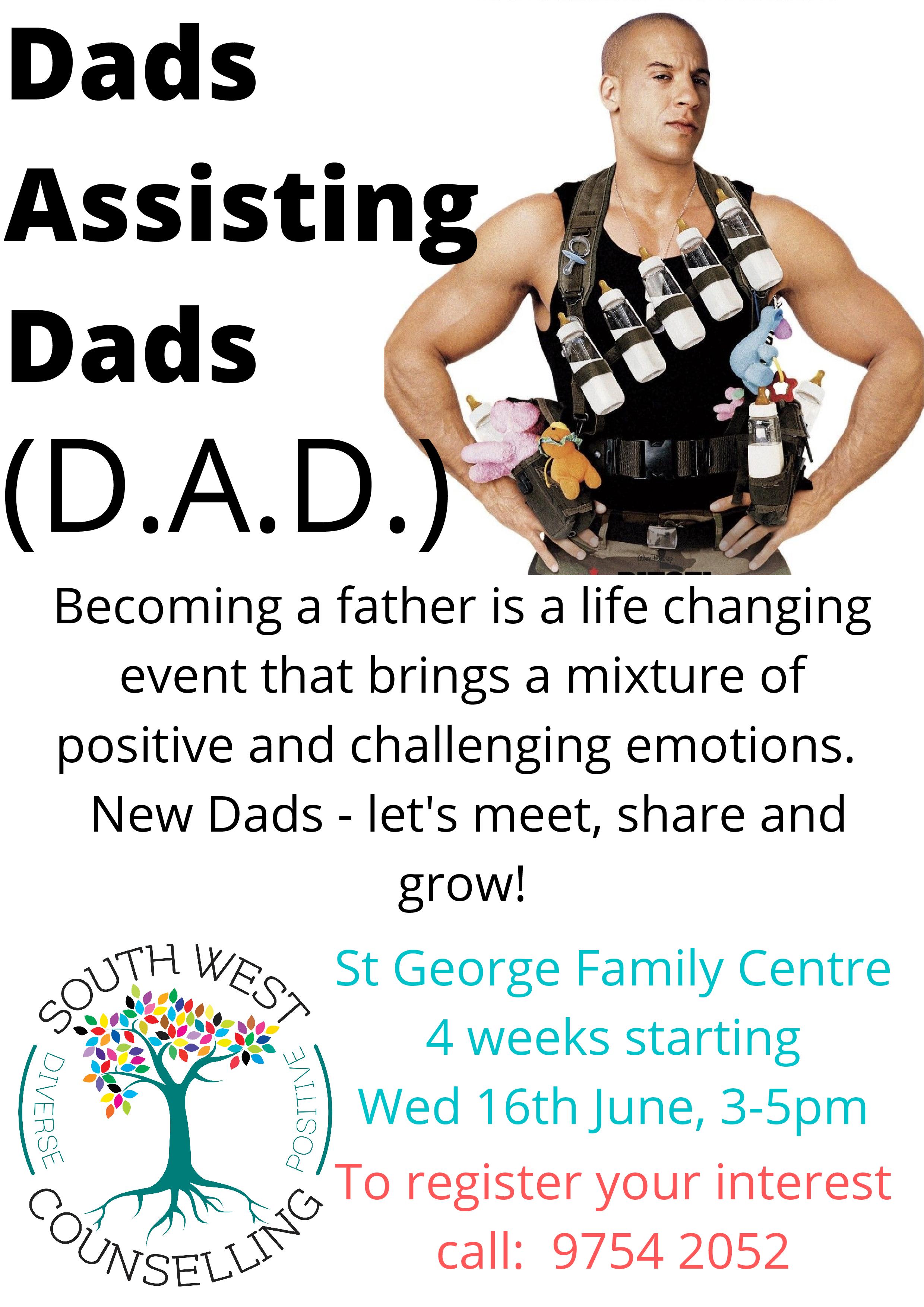 Join us for a great community family day of planting: More info here and poster below. We look forward to seeing you on the day. 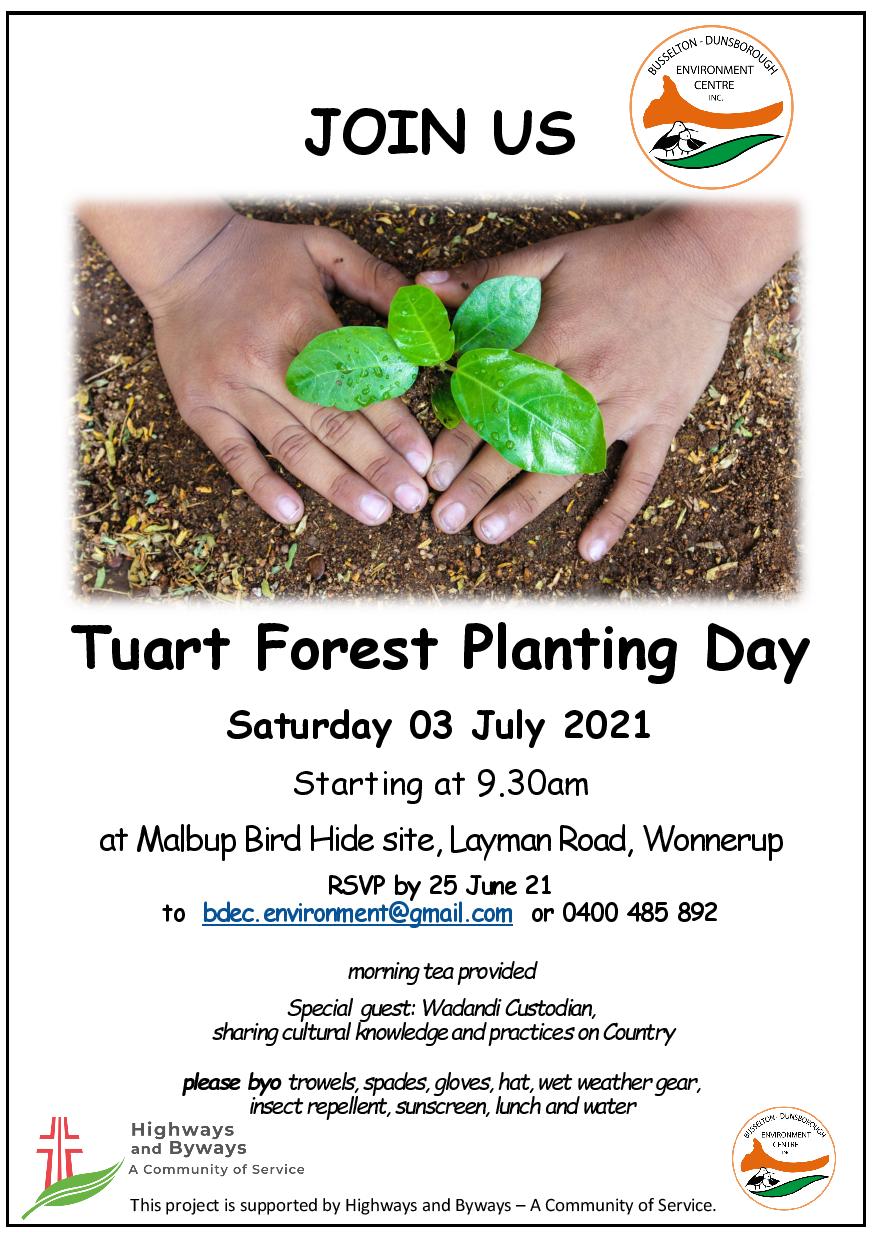 A volunteer information session is being held for Babtistcare Mirimbeena Residential Care.

More information on the flyer below 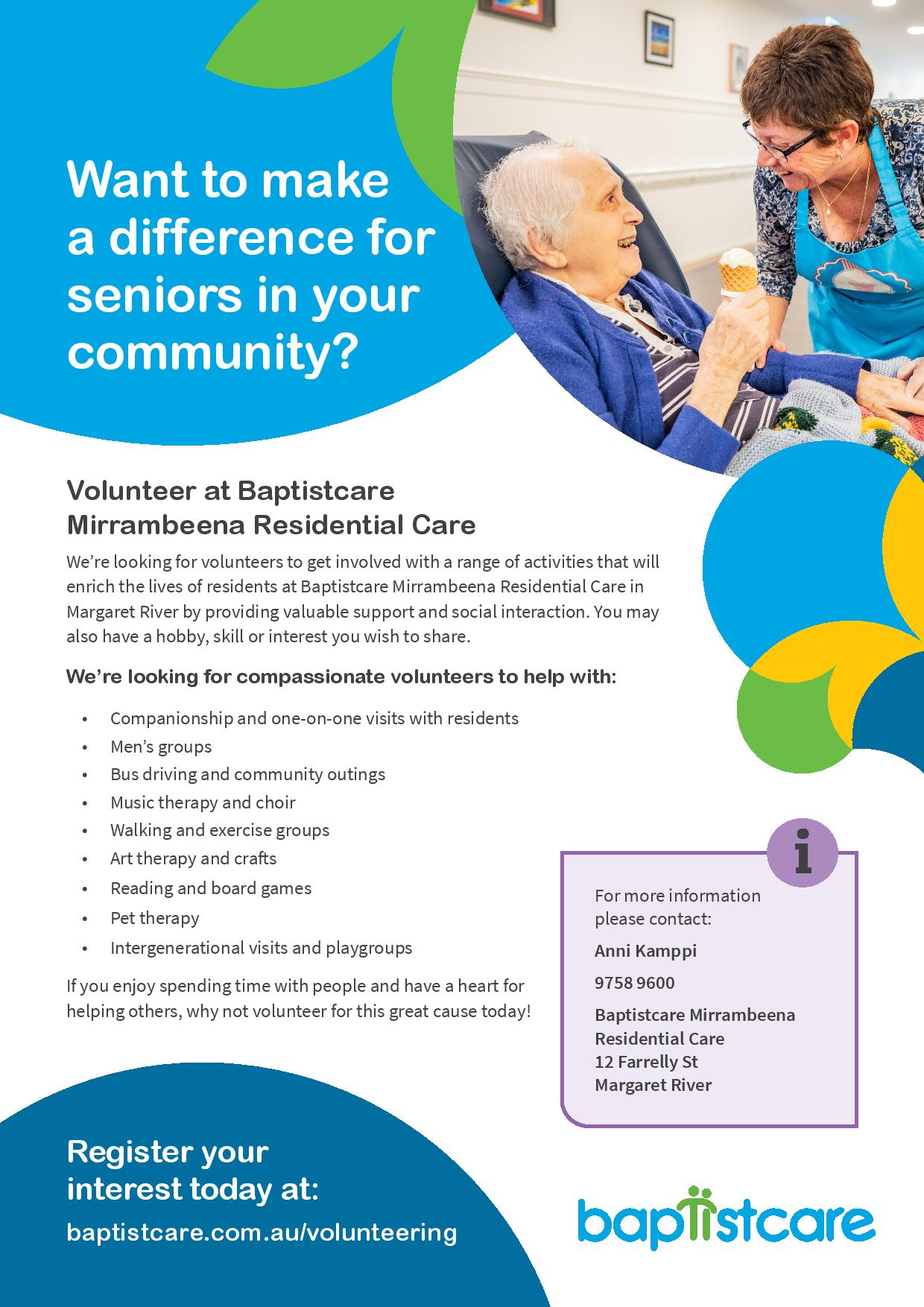 Listed below are some links and program information you may find useful.

Volunteer Phone Support Service
0492 862 225
Telephone support is available to anyone in the South West
wanting to connect and talk to a professional volunteer
about:
 End of life issues
 Grief, loss and bereavement
 Isolation (self or family members) see flyer attached
Free Community Training Program
“How to care for a very ill person at home”
Delivered by videoconference, this training program will help people with no prior health care experience to gain the basic skills and knowledge to care for a
very sick person at home. See attached Flyer
Thanks to the Busselton Hospice Care for putting this together for community access and support 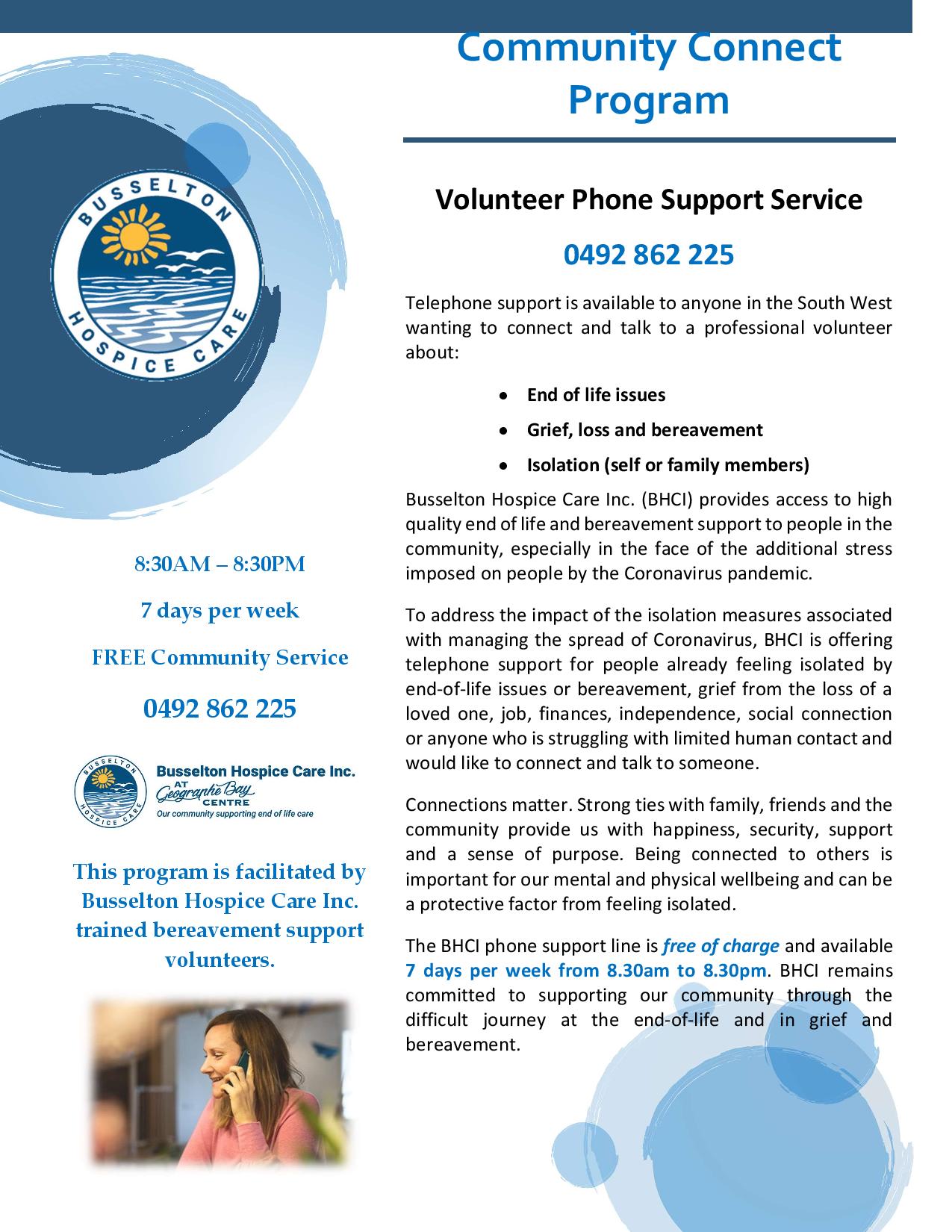 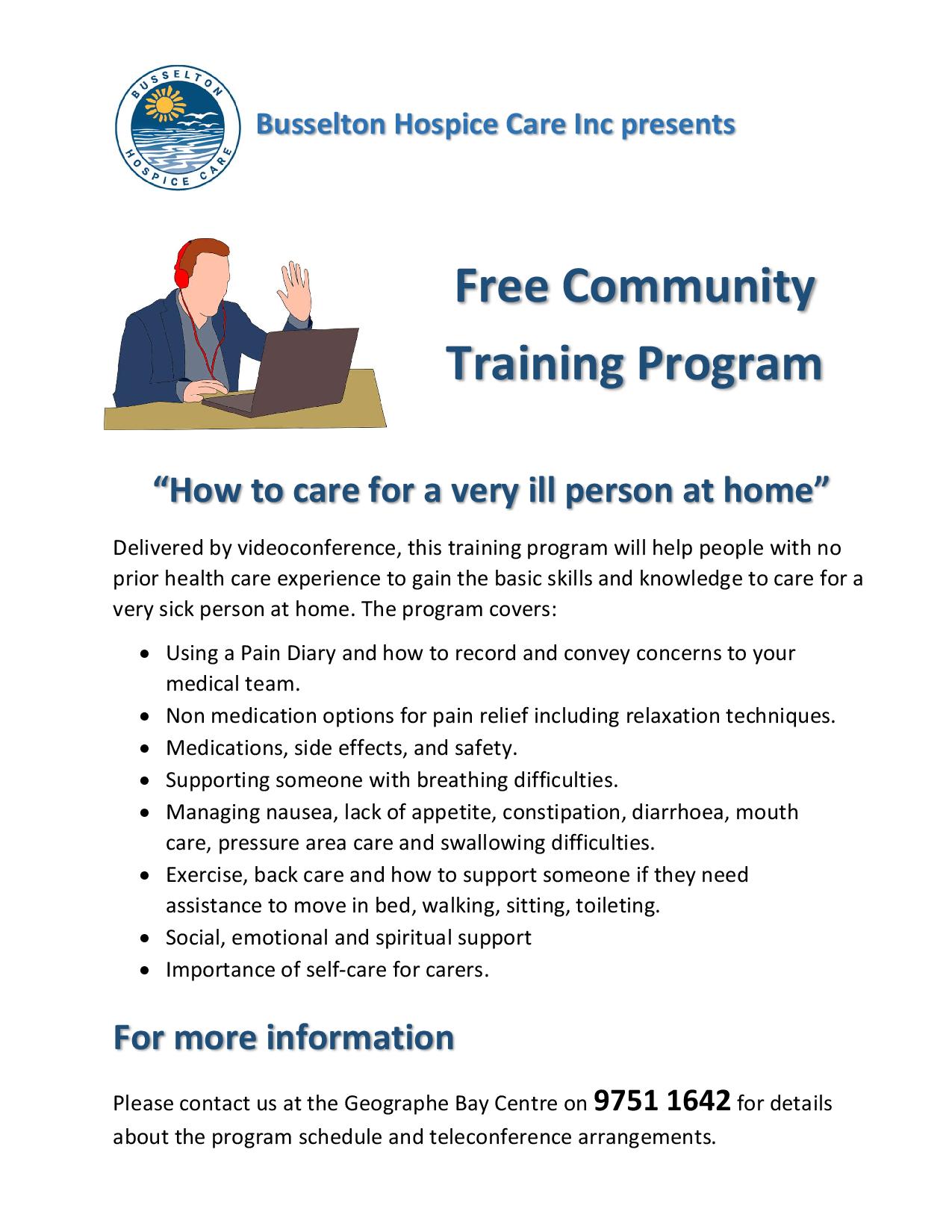 Recently 20 children and 27 adults had a great day out planting in the Tuart Forest. This event is held annually by BDEC and not only provides a wonderful family day out but helps the future health of our unique Tuart Forest reserves. Besides the hands on environmental care BDEC advocates for the environment through numerous avenues including submissions to relevant decision making bodies, monitoring of environmentally sensitive projects and proposals, sourcing funds for targeted intervention such as possum habitat and care, revegetation and planting and liaising with the City of Busselton to work in partnership towards sustainable planning and development.

BDEC also have available a wonderful booklet A Journey into the Ludlow Tuart Forest. This vibrant 32 page book, produced by the BDEC, explores the many aspects of the forest and its surrounds as well as some of the impacts threatening its future. More information here: A_Journey_into_the_Ludlow_Tuart_Forest 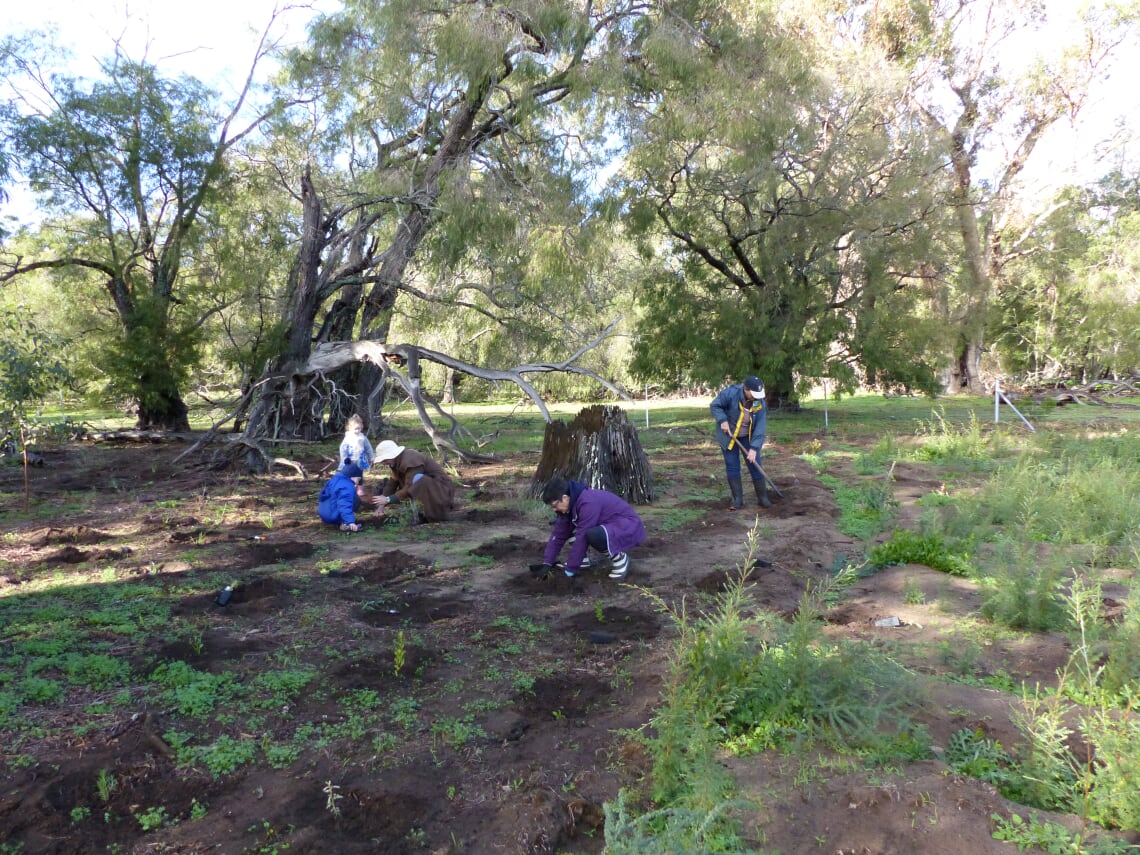 Besides being a general volunteer for hands on planting and events other opportunities are available that provide the organisation with direction, momentum and day to day running.  Get in touch to find out more This email address is being protected from spambots. You need JavaScript enabled to view it.

BDEC welcomes new members, public enquiries and the general public so why not drop in, get in touch or join up to make a difference, its FREE!

Busselton Dunsborough Volunteer Centre congratulates all recipients and nominees for this years volunteer of the year awards WELL DONE!. We also thank ALL the fantastic volunteers for their efforts and generous giving to our community.

Read about it and view pictures here:

Sponsor: Rotary Club of Busselton Geographe Bay - Tourism and Events Category:
Highly Commended award went to Barry Grimmond from the Margaret River Busselton Tourism Association.
The winner for the Tourism and Events Volunteer of the Year Award was Celia Clare from ArtGeo.

Sponsor: Geographe Camping and Tackle World - Senior (60 Years and Over) Category:
Highly Commended award went to Joan Parke from Naturaliste University of the Third Age.
The winner for the Senior Category was Don Tulloch from Geographe Community Landcare Nursery. 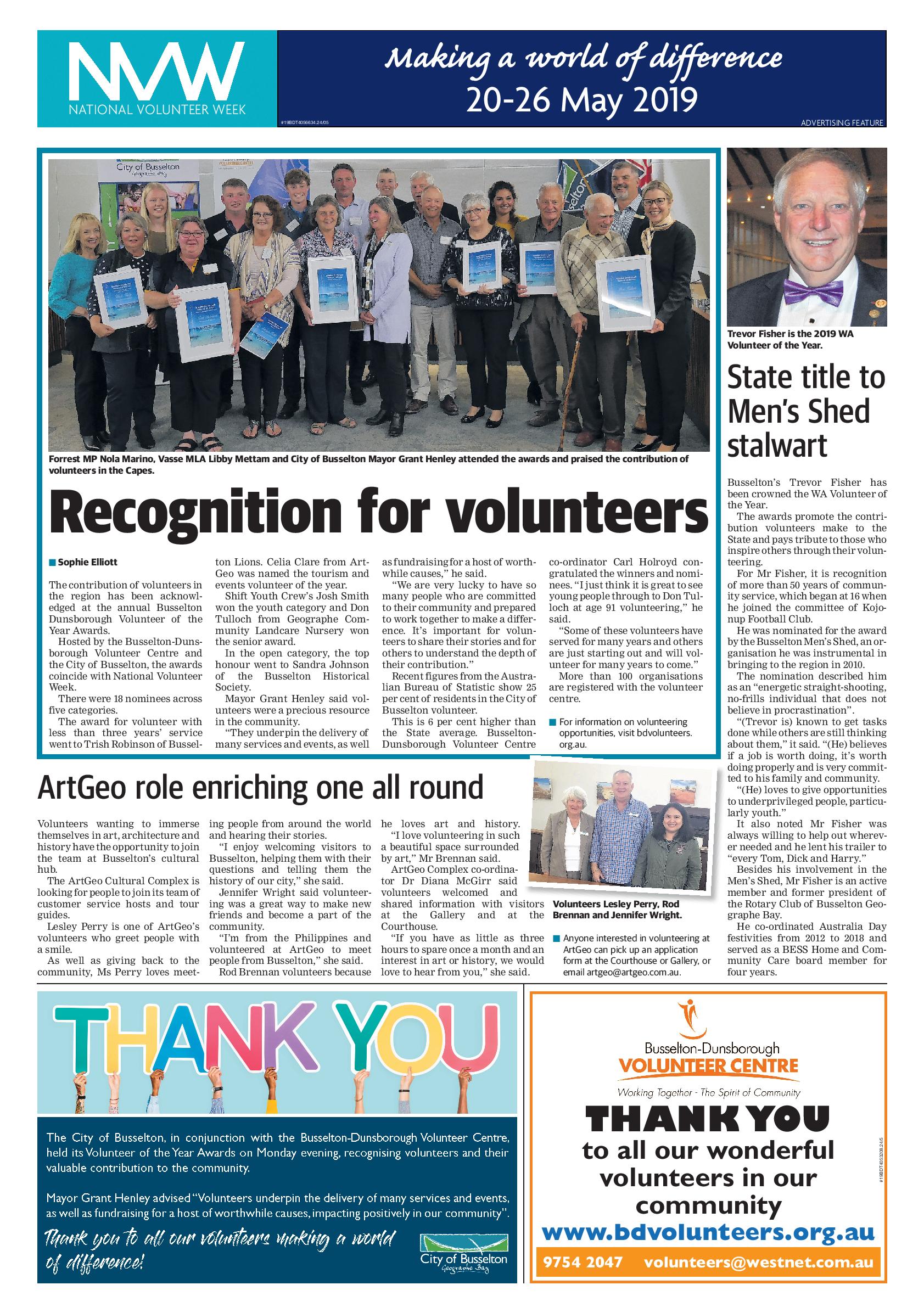 Be part of the 2019 SunSmart Busselton Festival of Triathlon in a volunteer capacity.

The 2019 SunSmart Busselton Festival of Triathlon, on from 3rd May – 5th May, is the premier triathlon event in WA and the culmination of the WA triathlon season. It is hosted by Triathlon WA, the state sporting body representing Triathlon in WA. As a small, not for profit organisation, volunteer support is vital and it has been the support of our fantastic volunteers that has made the event the success that it is.

If you or anyone you know may be interested, registration is NOW OPEN and more information can be found by clicking here Volunteer Information 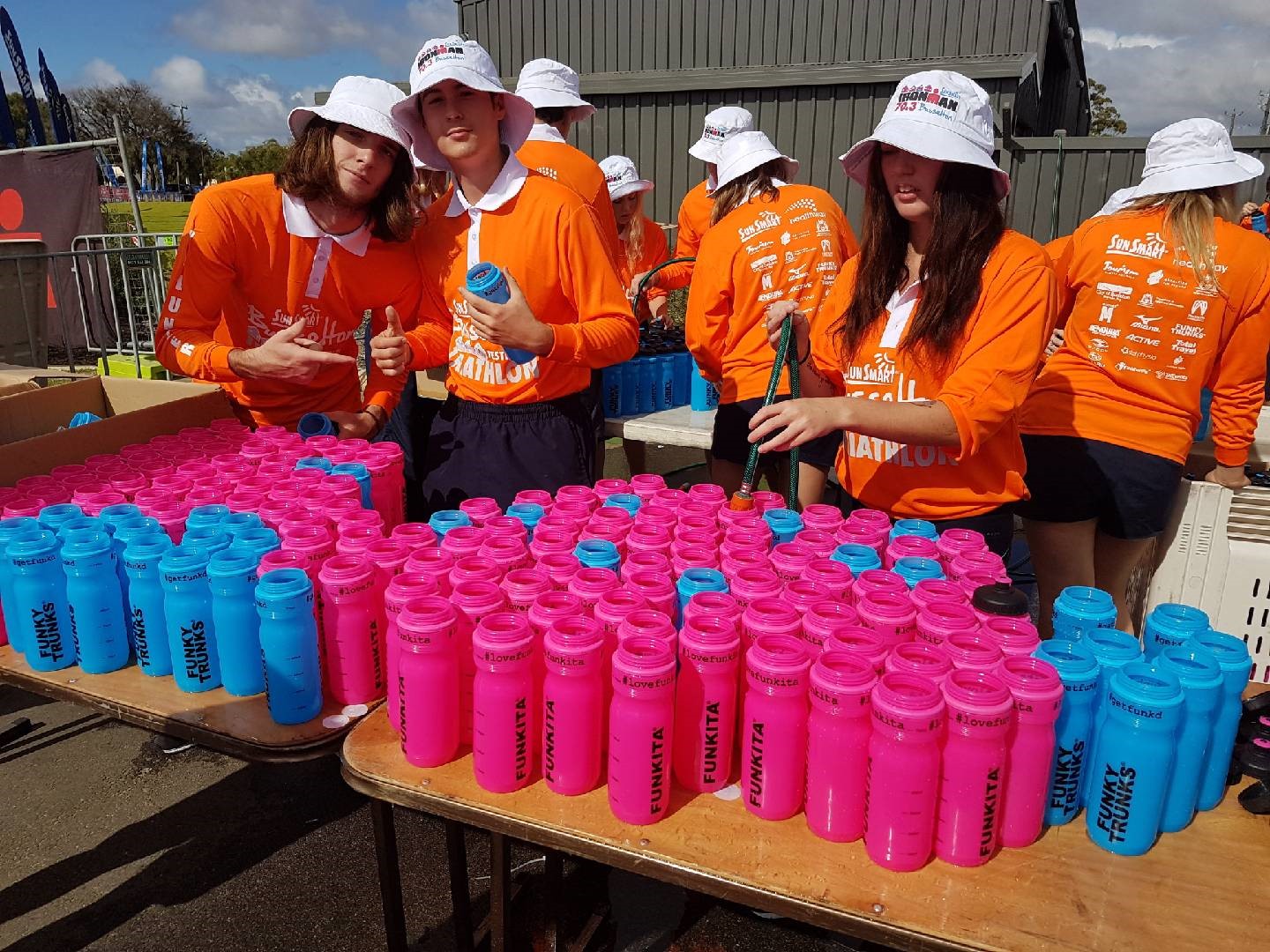 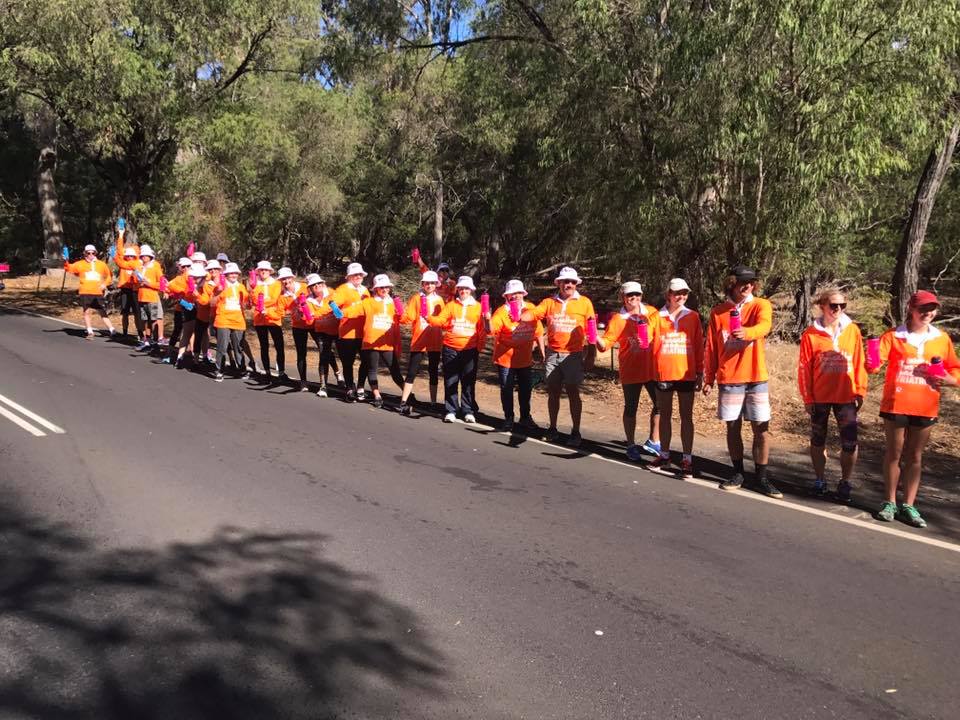 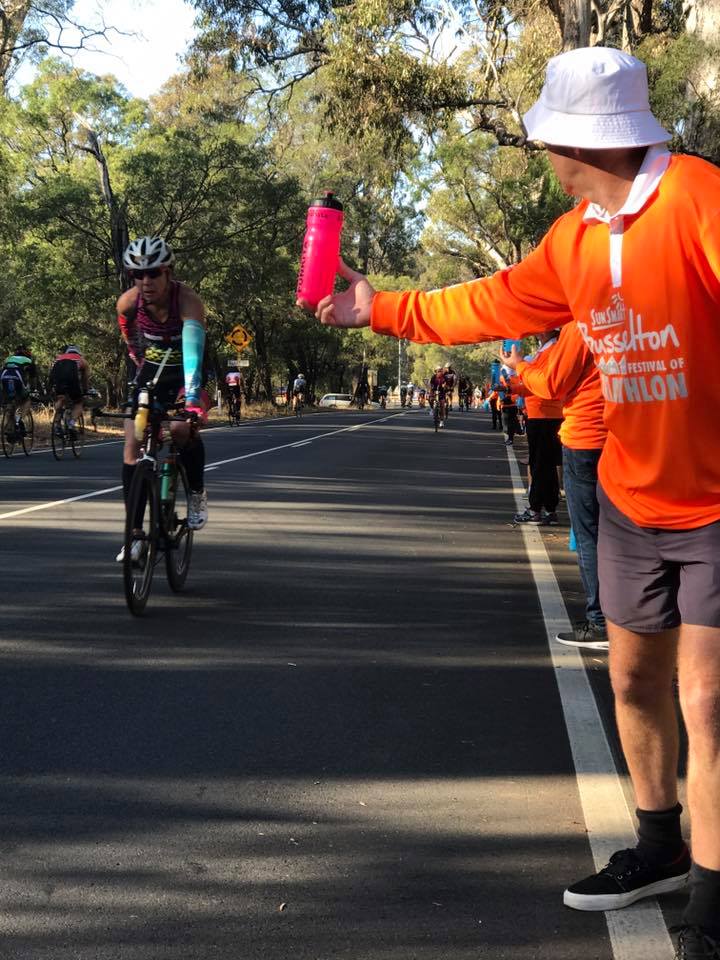 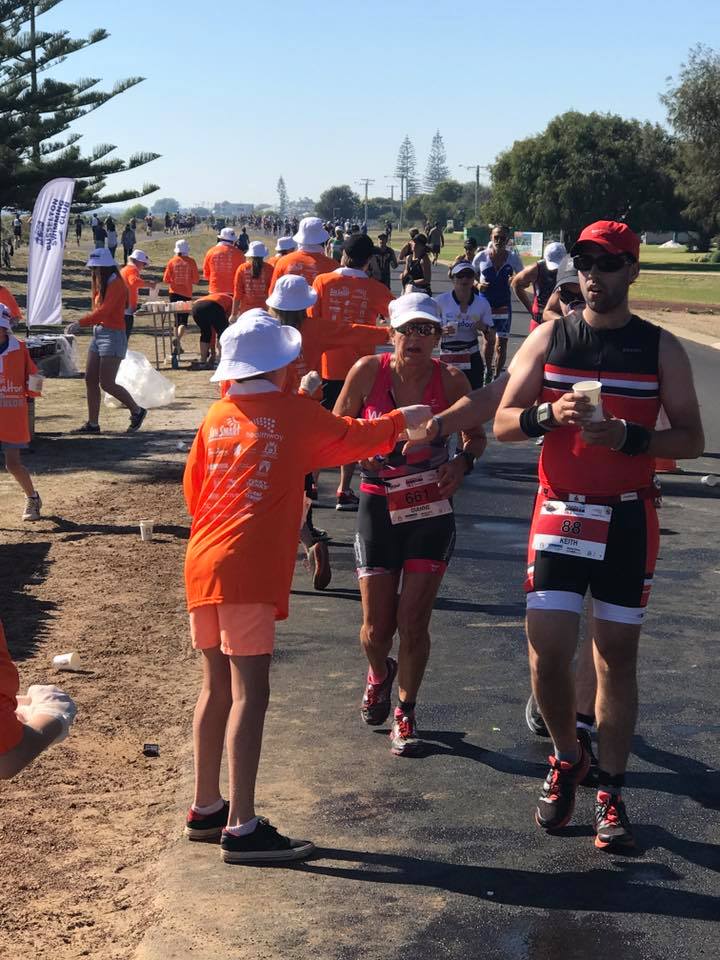 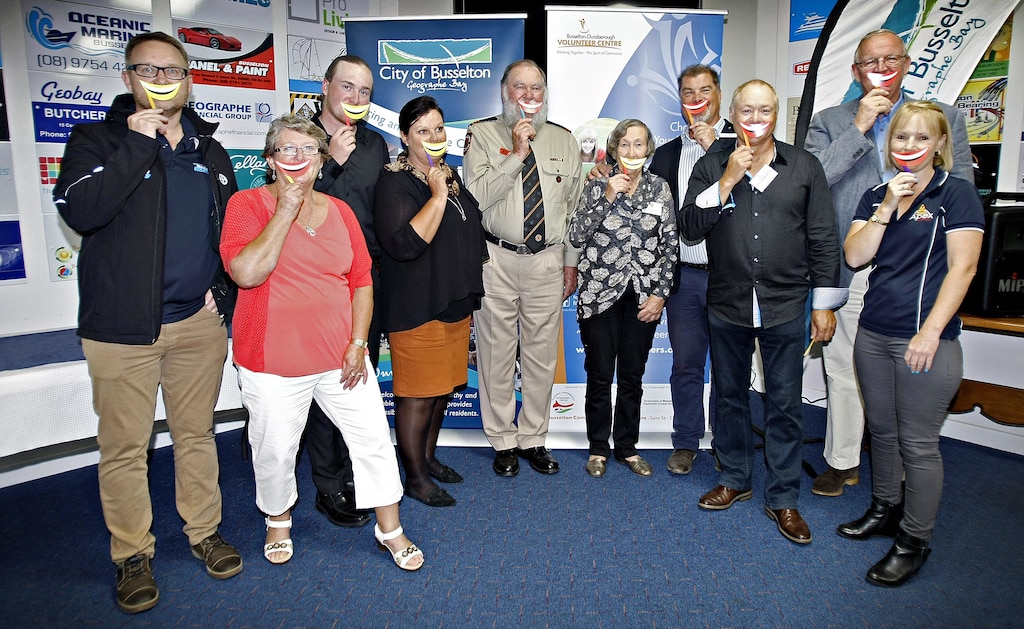 Busselton and Dunsborough’s tireless volunteers were cast into the spotlight on Monday night at the annual Volunteer of the Year recognition Awards.

The club had another winner in the open category with Helen Rabjones, who has served as chief administrator for more than a decade, among other roles.

Cr Henley praised the club’s work, making specific mention of a public safety decision to cancel the swim leg of a triathlon at the weekend after a shark sighting.

“I think that was in the highest echelon of volunteers performing in their duties and I commend both the surf lifesavers and the volunteer marine rescue guys who were there,” he said.

Ms Rabjones was also mentioned in the tourism and events category.

However, the award went to Doreen Bailie, who has been Jetty Host co-ordinator since 2011 and volunteers for organisations, events and during cruise ship visits.

“This success can be attributed to the many volunteers who provide a vibrant and friendly welcome to cruise ship passengers,” he said.

Des Austin — a bushfire brigade volunteer of more than four decades, and Busselton SES deputy local manager since 2013 — was commended in the seniors category, and the overall award went to Margaret Tickle.

The mayor jokingly pulled out a seat for Ms Tickle before reading out a lengthy list of volunteer activities with clubs, events, churches and education groups.

Cr Henley described volunteers as the backbone of the community.

“Sometimes volunteer work is challenging but our community always seems to be up for this challenge and that’s thanks to the efforts of people such as your selves,” he said.

The awards were hosted by the City of Busselton and Busselton-Dunsborough Volunteer Centre, with support from Volunteering WA and Lotterieswest.

Red Cross operates the Family and Practical support programs throughout the Southwest. The purpose of the Service is to provide caring and practical assistance to families with babies and young children who are facing extra challenges in adjusting to their parenting role. It is an early intervention service that offers respite and support to multiple birth families, mothers experiencing or at risk of postnatal depression or perinatal mental health problems and social isolation. 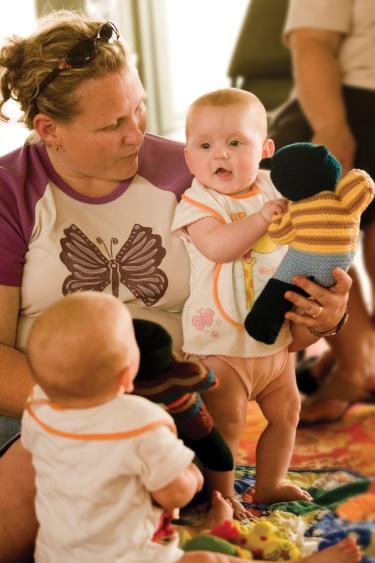 Family support has been supporting families since 1993 and is a unique service that Red Cross offers only in Western Australia. Since its inception, over 3,000 families have been assisted by creating a supportive environment and helping to minimise many of the daily stresses experienced by families with babies. We support families in Busselton, Dunsborough, Margaret River and Augusta.

Since 2008 Practical Support program has been supporting families by having volunteers visit the family home weekly and work alongside the mother assisting in domestic duties such as light housework, shopping and basic childcare e.g. feeding, settling babies, and preparing meals for children. The volunteer can also help with linking in with community and local supports and enhancing social networks. This Program is available in the Busselton area.

ROLE OF THE VOLUNTEER

Volunteers provide approximately 4 hours per week of in-home respite per family and may work with the same family for up to 6 months in the case of a multiple birth. Hands-on support - child related activities, feeding, preparing meals for children, settling babies. Role modelling - volunteers encourage positive interaction between parents and children (play, talking, and discipline) to develop a child's social and cognitive development.
Emotional support - ‘being there' for the mother, the willingness to listen without being judgemental or giving advice.
Social support - supporting families in developing social networks and linking to community resources.
For more information on this volunteer opportunity or other exciting roles contact us at the

Open Monday, Tuesday and Wednesdays 9:30am to 3:30pm - other times by request

Alternative ways to talk to us: Zoom, Whats App, Skype

To book a call you will need to send us an email or contact us on 97542047 and we will arrange a time to call you to discuss your volunteering requirements.

Please send email to This email address is being protected from spambots. You need JavaScript enabled to view it.